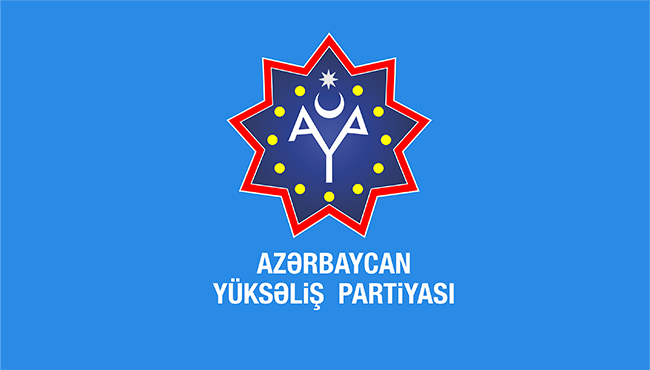 Information on the symbols and colors used in the logo (emblem) and flag of the Azerbaijan Rising Party:

1 - In the middle of the logo there is an adjacent sign (stamp) consisting of the letters A, Y and P. These letters were designed based on the fonts of the runic alphabet used in the ancient Goy Turk, Orkhon-Yenisei stone inscriptions. This combination of letters is associated with several totems of the Turkic world (wolf, eagle, horse, ram, bull), stamps denoting tribes, and the tree of life denoting life.

2 - The logo has eleven full moon in yellow and one half moon in white color. All together it is a sign of the Turkish calendar with twelve constellations. Half-moon represents rebirth and resurrection. The moon element also represents the abbreviated name of the party (AY Party).

3 - The octagonal star with a half-moon reminds us of the symbol of the Azerbaijani flag and that our party is connected to our state and statehood.

4 - The alignment of the full moons around the stamp, which is a key element, is similar to the alignment of the stars of the European Union, a sign that our direction of development and political course are closely linked to the strategy of European integration.

5 - The fact that all the elements and symbols are inside the octagonal star shows that the AY Party sees nationalism and modernity in unity. The fact that the star is octagonal indicates the number of climates in the Turkic world, the birth of a new person within nine months, and therefore indirectly the birth of a new political party, buta - a national ornament, and the nine-Oghuz union, which means unity and equality.

6 - Each of the colors used in the logo has a meaning.

Red color: a nine-pointed star is like a map of Azerbaijan represented by a geometric figure, and red is the borders of our country. In this sense, the idea is expressed that the red lines of our party are the same as the red lines of our country and people.
Dark blue: The dark blue color inside the logo represents the endless development, macro-cosmos, and spirituality.

White color: the white color of the stamp, half-moon, octagonal star and the inscription "Azerbaijan Rising Party" on the flag signify spiritual purity, bright tomorrows, the supremacy of the national will.

Blue color: The flag of AY party consists of a logo, the name of the party and a blue background. The color blue, which means clear sky, freedom, and greatness, also means eternal rising.